Wellness is a term often used in tandem with health. It is a state that we all strive to achieve.

The Centers for Disease Control and Prevention describes wellness as a positive outcome that makes sense to people. According to the CDC, there is no consensus around a single definition, but terms like emotion, fulfillment, and satisfaction are generally associated with well-being. What is clear is that wellness, and the positive impact it can have on your health, can take many forms.

A recent family visit put me at the forefront with my well-being.

I am one of five siblings. Last weekend my two sisters and my brother from outside came home to visit my mom and celebrate my twin sisters’ birthday. When they were joined by my local sister, their return brought the five of us together for the first time since my father passed away in 2017. For about a year, Mom has been living in a retirement home. While COVID-19 presented challenges, in one way or another, they all spent time with it. She was extremely happy and I felt good that they had seen Mum. Zoom calls and the phone are OK, but there’s nothing quite like a visit in person, even if you can’t kiss each other.

As significant as it was knowing that Mom was seeing her kids, just as significant to me was the time the five of us shared over the weekend. With four of us in our 60s, we’re at the point where the conversations have a wide range. Our dinners were peppered with stories from our childhood, the accomplishments of our children, descriptions of our beautiful grandchildren and our plans for the next phase of life.

I was struck by the prospect of reminiscence. Yes, some stories have taken me to places I used to regret, but overall it’s amazing how things seem to come together despite the trials and tribulations of life. I have found that looking back and considering what lies ahead, especially the future of our children and grandchildren, is very motivating.

For me, our dialogue created a context of purpose and meaning. It is as if I was at a seminar where the topic was my life and my family offered introspection and analysis. Yes, we had a lot of fun and shared a ton of laughs, but there was a very emotional foundation that reinforced how precious life is and the many reasons we need to be thankful. 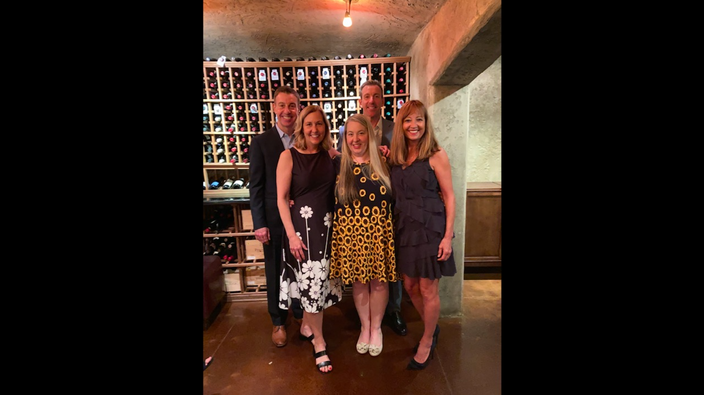 The weekend kicked off last Thursday when my sisters, Terry and Bernadette, arrived from Arizona and Kansas City respectively. Their first order of business was to see mom. Don’t ask me how they did it, but I’m told it took a bit of maneuvering, vaccination papers, rapid tests and an outside executive. Bottom line, Mom saw her kids and all parties were thrilled. I later joined them with my wife at our house for dinner, where we got up to speed on everything from the state of the nation to the upcoming Chiefs-Eagles game. The basics were in place. It was if the time between our last gatherings disappeared. We had reconnected and were ready for more.

Last Friday my brother Chris arrived from California. I last saw it before COVID in 2019. The five of us were now back together in Garden State. We met at the hotel where they were staying and then went to a nearby restaurant for dinner. We were joined by my two sons, their wives and my 5 year old grandson. What a night. Stories, jabs, photos and birthday candles. It was the same restaurant where we ended up after our father’s funeral, which gave it special meaning. My grandson Luca was in his glory making several requests to the waiter for the dessert menu while we were still on the appetizers. He finally enjoyed his ice cream sundae. The look in his eyes as the waiter brought it was more than precious.

On Saturday morning, Chris, advised by our sisters, followed the same protocols and was able to see mom. As the youngest of five siblings, he has a special place in her heart. Her visit closed some memorable days for mom, who will enjoy a long life for her.

On Saturday afternoon it was a stop at the Eagles Pro Shop in Cherry Hill so Chris could get a jersey for Sunday’s game, followed by a stroll through Haddonfield town center, lunch and more. catching up. But wait, it’s too antiseptic – too bland for my family. It turns out that the brewery where we had lunch was having a competition to celebrate the start of Oktoberfest. A group of clients were recruited to participate in a competition where they each had to hold a full mug of beer with their arms straight for as long as they could – without spilling the beer or bending their arms. On a whim, my twin sisters in their sixties, the birthday girls, entered the contest. In no case would they outlive the clearly younger competitors.

One by one the others fell back; spilling beer, bending your arms and just losing their grip. Incredibly, it happened to my sisters. The crowd was shouting. We were going crazy chanting their names. Finally, Terry, the sportiest twin and my favorite to win, dropped her arm. Toni, a longtime waitress, won the contest. Incredible and what a pleasure. Talk about a family time that we will talk about for years to come.

On Saturday night, it was time for another family dinner, followed by a dance. Something my father would have done with my sisters. It was a family ritual and I was happy to find a place that maintained this family tradition.

On Sunday Chris and I headed for the Eagles game as the girls went their own way. We picked up her son Bailey, who lives in New York, at 30th Street station and we were on our way to the Linc. We hit a friend’s tailgate, then entered a busy stadium. While the game against the 49ers didn’t go as we had hoped, Chris, Bailey and I had a great time rooting for the Birds on a great day. The intergenerational dimensions of this family excursion did not escape me. It was another episode of what was a whirlwind weekend.

There is nothing like reconnecting with loved ones to put life in perspective, especially the siblings you have shared so much with over the years. This has turned out to be a significant investment in my well-being, an investment that will provide me with an additional focus on maintaining a healthy lifestyle so that I can enjoy these weekends a lot more in the years to come.

Louis Bezich, senior vice president and administrative director of Cooper University Health Care, is the author of “Crack The Code: 10 Proven Secrets that Motivate Healthy Behavior and Inspire Fulfillment in Men Over 50”. Read more from Louis on his website.